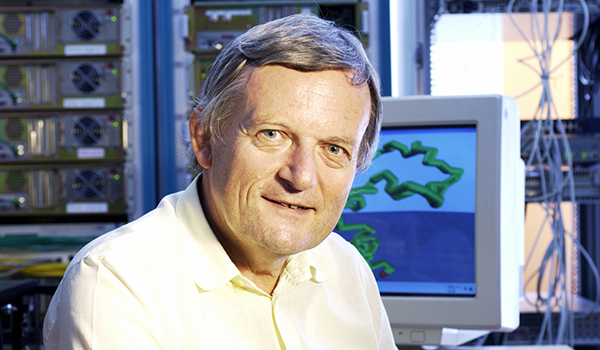 Professor Kurt Binder from the University of Mainz was awarded the Berni J. Alder CECAM prize on September 6th, 2001, at the Conference on Computational Physics (CCP 2001) in Aachen, for pioneering the development of the Monte Carlo method as a quantitative tool in Statistical Physics and for catalyzing its application in many areas of physical research.

Kurt Binder’s name is synonymous with Monte Carlo computer simulations because he established this technique as a quantitative methodology in statistical physics, an achievement that marked the turning point from qualitative to quantitative analysis. The combination of quantitative Monte Carlo simulations coupled with analytical theory allowed Binder to make contributions to many different fields of statistical and condensed matter physics.

In all these fields Binder’s contributions are widely recognized. The methods Binder pioneered have had very broad applicability and the impact and influence of his work has been truly enormous.

Professor Binder receives the award for his seminal contributions to the solution of analytically intractable problems which also stretch experimental investigation to the limits of feasibility, such as the behaviour of polymers. He already recognised the potential of Monte-Carlo computer simulation as a means of tackling this type of problem in the early ’70s, and was instrumental in establishing this method as a valid scientific approach.

The methods developed by Professor Binder to assess the statistical accuracy of simulation data and the effects of finite system size, as well as the systematic non-perturbative analysis of fluctuations, now comprise an essential part of the theoretical physicists’ toolbox. In this respect, Kurt Binder must be regarded as a pioneer of the ‘third’ pillar of physics alongside theory and experiment.