In this lecture series, we take a different look at fundamental developments of simulation and modeling. Milestone conceptual steps, methods and algorithms are presented by their originators. These technical lectures are followed by an interview in which the speakers recall for us the period, problems, people and circumstances that accompanied these developments, providing important and unusual insight in the birth and growth of tools that we now take for granted.

These lectures are online.

The phase behavior of pure components and mixtures plays an important role in science and technology, so there has been interest in molecular-based calculations of phase equilibria since the early days of computer simulation. In this presentation, I plan to review the origins of the Gibbs ensemble methodology [1,2] and its development in the intervening thirty years, which have enabled the routine calculation of phase diagrams for fluids composed of complex molecules. An alternative to the Gibbs ensemble is provided by histogram reweighting grand canonical Monte Carlo, which have greater accuracy near critical points. A number of other efficient Monte Carlo sampling algorithms have also been proposed over the years. In addition, open-source fast and scalable molecular dynamics codes have been developed that can be used in direct interfacial simulations of phase equilibria. The main remaining challenges in this area are related to the inadequacies of the current generation of force fields and the development of machine-learning methods to allow ab initio based predictions of the phase behavior.

Athanassios  Panagiotopoulos received an undergraduate degree from the National Technical University of Athens in 1982 and a PhD from MIT in 1986, both in Chemical Engineering. He was a postdoctoral fellow in Physical Chemistry at the University of Oxford (1986-87) and held faculty positions at Cornell (1987-97) and the University of Maryland (1997-2000). He is currently the Susan Dod Brown Professor and Department Chair of Chemical and Biological Engineering at Princeton University. He has received numerous awards and honors, including the AIChE Colburn Award, and the Prausnitz Award in applied chemical thermodynamics. He was elected to the U.S. National Academy of Engineering in 2004 and to the American Academy of Arts and Sciences in 2012. He is the author of more than 300 technical papers and of the undergraduate textbook “Essential Thermodynamics” (2011). 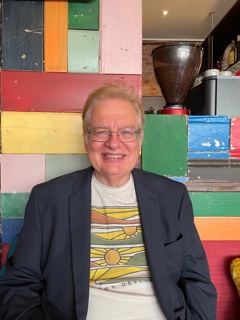 I want to begin by recalling the day that the original Gibbs ensemble Monte Carlo paper dropped onto my editorial desk in Southampton and the range of opportunities that immediately opened up with this breakthrough. As an example, we recall that the Gibbs ensemble Monte Carlo method (GEMC) is readily extended to multicomponent mixtures by increasing the number of independent boxes in the simulation. In this way, all six classes of phase behaviour for binary liquid mixtures can be reproduced with the simplest potential models.  The technique can also be extended to three component mixtures exhibiting up to four coexisting phases (LLLV). It is not easy to study the effects of confinement on fluid-phase equilibria in irregular geometries by experiment or classical liquid state theory. This is where simulation comes into its own and GEMC can provide a testbed for analytical theories where the pore is modelled as a static external field of hard spheres. One of the beauties of the method is the ease with which it can be extended to fluids of small rigid molecular fluids, fluids of flexible molecules and even to polymers. We will examine a more recent application of GEMC to a quantum fluid, 4He, using a path integral approach. Before the development of GEMC, fluid phase equilibria were often simulated using a gas-liquid interface in a periodic slab geometry and changing the temperature to move along the  LV coexistence curve. We want to illustrate some of the hurdles in the study of phase equilibria using this direct approach and how they have been gradually overcome with particular reference to liquid water and liquid argon.

Dominic Tildesley received his BSc in Chemistry from Southampton University in 1973 and his DPhil from Oxford University in 1977. After postdoctoral positions at Pennsylvania State University, Cornell and Oxford, he joined the Chemistry Department at Southampton University in 1981. He was awarded the Chair of Theoretical Chemistry at Southampton in 1990. In 1998 Dominic joined Unilever Research Port Sunlight as the Head of the Physical Sciences Group. In 2003 he became Chief Scientist for Unilever’s Home and Personal Care Division. He retired from Unilever in June 2012. He moved to Switzerland in January 2013, to become Director of CECAM (Centre Européen de Calcul Atomique et Moléculaire) based in Lausanne in Switzerland. He was awarded the title of Professor Titulaire at the École Polytechnique Fédérale de Lausanne. He retired in December 2017 and is currently a visiting Professor at the University of Southampton, where he holds an honorary doctorate. He is the author of The UK e-Infrastructure Strategy for Science and Business: a roadmap for the development and use of advanced computing, data and networks, and he co-chaired the UK E-infrastructure Leadership team. He has been President of the Royal Society of Chemistry and received a CBE for services to science, technology and business in 2014.