CECAM has enjoyed a happy and productive relationship with Berni that has spanned almost half a century. It is well known that, every three years, the Berni J. Alder CECAM Prize is assigned to distinguished members of our community, but our interactions went well beyond formal occasions. In the following, you will find some documents – from our archives or other sources – reminding us of Berni’s role in our field. We thank all contributors and we hope that you will discover or recognize some passages of a productive scientific life and of a remarkable personality that will be truly missed.

We believe that Berni would have approved us opening this memento with our very last interaction with him, on August 3-4 2020. Among the dissemination activities of a CECAM led H2020 project, we published an on-line comics issue illustrating simulation and modelling and the importance of HPC in a language, hopefully, clear for the general public. The piece discussing the relationship between experiment, theory, and simulation features three fairies and we thought to give them faces familiar to the community. Of course, we reached out to Berni (and Mary Ann) to ask for their permission. Here is an excerpt from the email exchange: 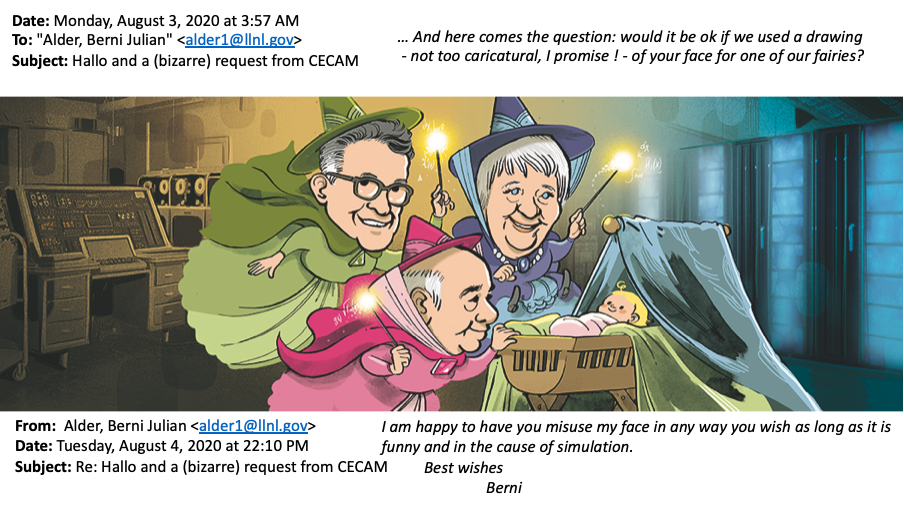 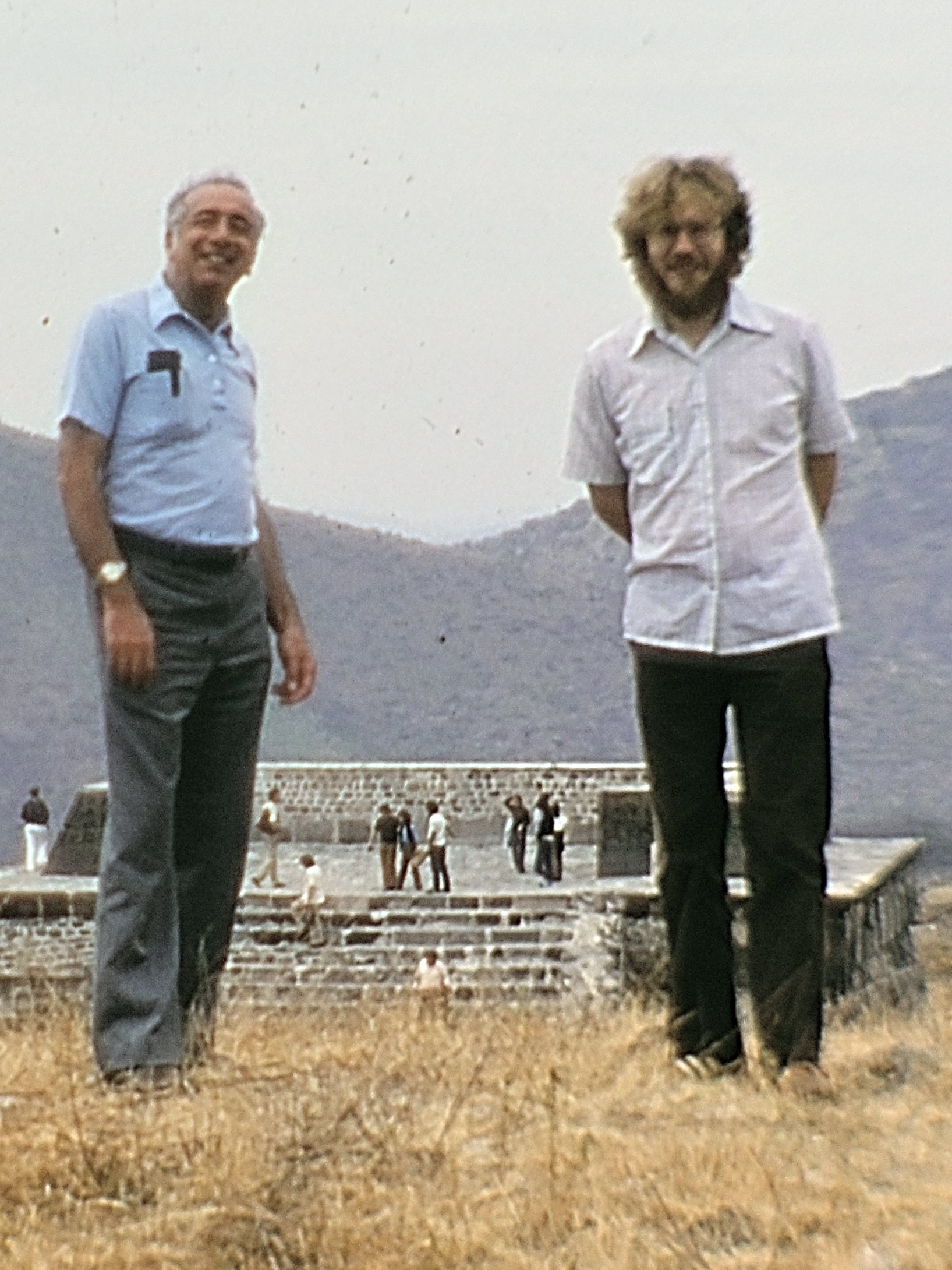 Berni Alder was one of the founders of the field of molecular simulation. Those of us who were fortunate enough to work with him have many memories of times spent together. Many others encountered him at workshops and conferences, including those at CECAM and will remember his persistent questioning and putting forward his views on many scientific questions. However, everyone associated with CECAM has been influenced, directly or indirectly, by his work.

Around 1950, Berni’s PhD advisor at CalTech , the physical chemist John Kirkwood, set him the task of estimating the radial distribution function of hard spheres using an approximate integral equation approach. Berni was one of those who wouldn't give up until the fundamental questions were definitively answered though it took many years. During this work, he and Stan Frenkel devised a Monte Carlo (MC) sampling algorithm but his thesis project involved working with mechanical calculators. Without access to an electronic computer they were scooped in 1953 by the publication of the famous “Metropolis” random walk algorithm (actually mostly due to the other authors, the Rosenbluths and Teller). Berni’s advisor was not convinced of the correctness of the Alder-Frenkel approach and did not want them to publish their algorithm until later, in 1955.

In 1955 Berni Alder became one of the first employees at the newly opened Berkeley Radiation Laboratory, now known as Lawrence Livermore National Laboratory. He remained at the Laboratory for the rest of his career, only stopping his visits there after the closing of the Laboratory because of Covid-19 pandemic. When Berni started working at Livermore, he began to get access to the available electronic computers and returned to his PhD problem: the phases of hard spheres as a function of density. Together with another physicist (Thomas Wainwright) and a programmer (Mary Ann Mansigh), over the next 15 years they developed and applied the Molecular Dynamics (MD) method for hard spheres and disks. One of their first achievements was a simultaneous publication in 1957 with William Wood (Los Alamos) on the equation of state using both MD and MC. The agreement obtained between two quite different algorithms and different computers by different authors removed the doubts over the reliability of simulations in giving useful results about strongly interacting many-body systems. They found that as few as 100 spheres was enough to represent a many-body system. The team of Alder, Wainwright and Mansigh employed many of the standard features of MD used to this day: boundary conditions in space and time, convergence, error estimation, signals of phase transitions, and correlation functions. Their images were used in popular articles and textbooks around 1960 and allowed one to visualize a liquid, in a day well before scanning tunneling microscopes showed us “real” images of the atomic world.

In the 1950s, one of the critical questions to be addressed was the nature of the liquid-solid transition for hard spheres. The textbook explanation for why solids are formed is to minimize the total energy; for a system with attractive interactions between molecules, a regular arrangement of atoms has the lowest energy. But how does that work for hard spheres which are only repulsive? Through the computer simulations Alder and Wainwright found a first-order transition in hard sphere systems, thus establishing that some systems crystalize at high density to maximize their entropy. They followed up this study with simulations of hard disks. It was known that the Mermin-Wagner theorem in two dimensions prohibits long-range order. A few years later Kosterlitz and Thouless clarified the situation: one can have long-range orientational order in 2D. Recent simulations of millions of disks still find the first-order transition to a solid; however it is preceded by a continuous transition to a hexatic phase at lower density.

Alder and Wainwright next began investigating the microscopic origin of hydrodynamics, e.g. the Navier-Stokes equation. This had only been established for nearly ideal gases, but the new MD simulations could tackle the dynamics of a strongly interacting liquid of hard disks or spheres. Going back as far as the 1905 work of Einstein, it had been assumed that non-equilibrium fluctuations would decay exponentially fast. In 1970, with careful studies of the velocity autocorrelation function, C(t), they found an algebraic decay. Namely C(t) -> t-D/2 at large time, t, and dimensionality, D. Because of this long tail, linear response theory in 2D had to be reformulated.

Around 1970 Berni became interested in simulations of quantum systems. Without being able to accurately treat systems of electrons, and thus obtain the forces, one could not make definite predictions for any realistic material, even if the ions could be described with classical MD. In 1978 with Berni’s help, I moved to California and brought quantum methods (VMC and GFMC) developed with Malvin Kalos during my thesis work at NYU and Cornell. Berni gave me access to the array of CRAY 1 computers just being installed at Livermore, fantastic machines that could deliver 12.5 MFlops if you could use the vector units. Mary Ann Mansigh, taught me how to use the CRAYs, and how to pick up the unused computer cycles at Livermore, and at other labs: Sandia, NASA Ames, Los Alamos, and in Bochum, Germany. Somehow Berni had convinced those facilities to let me run on their supercomputers.

In the years I worked with him, Berni would drive from his home in El Cerrito to Livermore 3 days a week, showing up just before lunch. The other days he would spend on the Berkeley campus. This was when he was editor of the Journal of Computational Physics. For several years my office at Livermore was next to his and I would hear the loud telephone calls as he badgered people around the country to review manuscripts, or to act as go between for young scientists looking for positions. Around dinner time he would give me and others rides back to Berkeley from Livermore in his old Volvo. During this hour-long ride he would make sure our projects were on track. He would also give professional advice and guidance on giving talks (“You leave the audience with only one idea or no ideas.”) and which problems to work on (“Make sure you work on the fundamental problems. Don't get lost in mathematical formalism but focus on simple arguments.”). Through him I learned how to make collaborations work. (“Don’t worry about whether you get immediate credit for your contribution. People will eventually determine who contributed.”) What always came through in these conversations was his interest in my personal life, including how my family was doing.

Using the computer resources at Livermore and around the world, Berni and I did the first large scale calculations of the simplest model of electrons, the so-called jellium model, using the Diffusion Monte Carlo (DMC) algorithm. The correlation energy of the electron gas we computed in 1980 supplied and standardized a key ingredient in density functional theory. Berni told me at the time that our Phys. Rev. Lett. would be the big hit it turned out to be. In the next few years we applied this algorithm to dense hydrogen, the first such solid state calculation using DMC. In 1987 I moved to the University of Illinois, thus ending my days working with closely with Berni. In the following years he would periodically contact me; he was never satisfied with the “fixed-node” approximation for fermions and was interested in exploring new approaches. 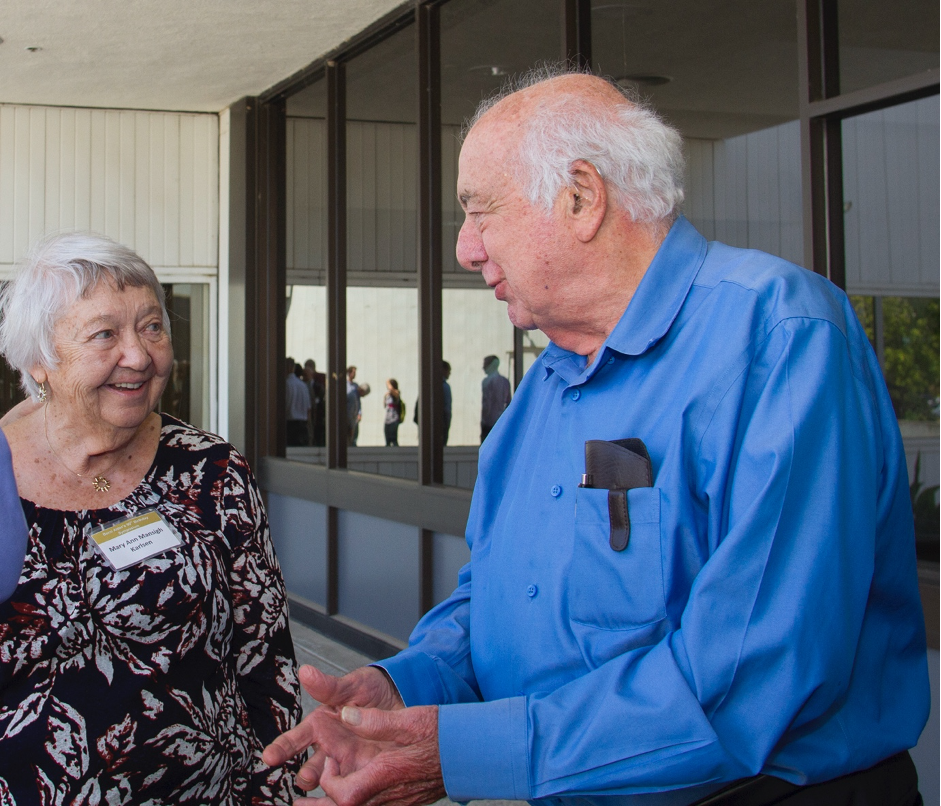 I spent 25 years of my computer scientist career working for Berni Alder at the Lawrence Livermore National Laboratory. In the book, Advances in the Computational Sciences, published after his 90th birthday symposium, he wrote in presenting it to me, that my hard work had made his computer contributions possible and added “and it was fun.” Indeed, it was. 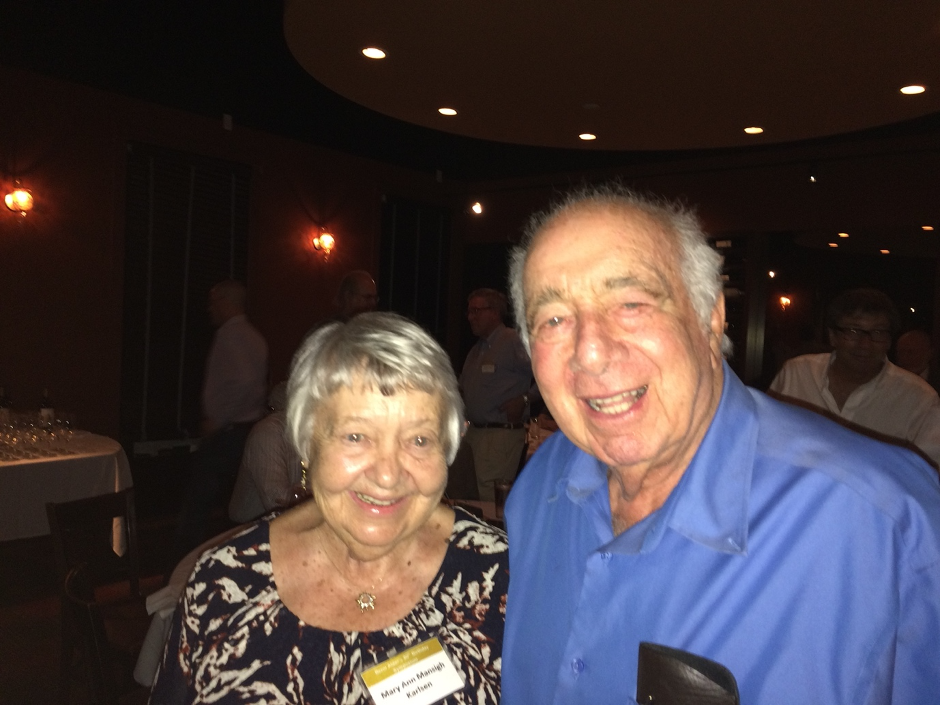 Although working for Berni was often intense and difficult, I did have fun. While both of us were living in Berkeley, we would carpool the forty miles to Livermore on the two days, Tuesday and Thursday, that he worked at the lab there. I might not see him at work all day, but our work discussions would often take place while commuting. That was fun. And sometime co-workers would ride along with us or join us for dinner when we worked late. And that was fun. Berni would often assign me to work with others in his group or with visiting scientists, which I enjoyed doing. He would give me short unusual assignments, like making the first movie made on a Livermore computer. It depicted particle movement and was included with a textbook used at U.C. Berkeley. That was a lot of fun. I also had chances to mingle with his family, once attending the rodeo in Livermore; another time, joining them at the opera in San Francisco—and that was fun. I am happy that I had the many years to spend on Molecular Dynamics and work with him. When he received the National Medal of Science from President Obama, it gave me great satisfaction that my career had made a difference in the scientific world. And in these latter years, I have enjoyed the attention Daan Frenkel and CECAM have given to my career. It has added much to my fun.

On November 15, 2017, Mary Ann Mansigh visited CECAM in Lausanne and shared memories of her long collaboration as a coder with Berni Alder. You can view her conversation with Daan Frenkel (on Berni and more) here 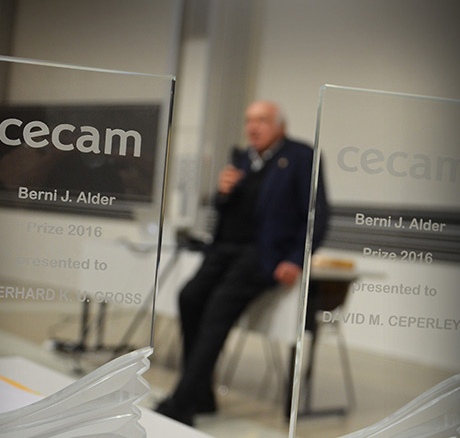 The Berni J. Alder Cecam prize was awarded for the first time in 1999 to Giovanni Ciccotti. It took place during a conference celebrating the 30th anniversary of Cecam in Lyon. The decision to create the prize was taken by the Cecam Council and supported by the European Physical Society Committee dedicated to Computational Physics. The motivation lied essentially in the scarcity of scientific prizes at the European level and in particular in the field of computational sciences.

The naming of the prize did not necessitate much discussion since Berni’s stature as a founding father was so much obvious. Also, Berni had always been supportive of Cecam activities. The person to convince was in fact Berni himself: « why don’t you rather give it to me? ». We had several arguments, among which that naming the prize after him would be stronger support in the perspective of getting higher level prizes: one year later, Berni was awarded the Boltzmann medal by the statistical mechanics community and agreed that Cecam was right!

This interview started the 9th September 2001 in Konstanz in the company of Giovanni Ciccotti and David Ceperley, in the eve of the SIMU conference “Bridging the Time-Scale Gap”. Due to the events of September 11, 2001, the interview was completed in Berkeley during the mini-statistical mechanics meeting organized by David Chandler, January 2002. 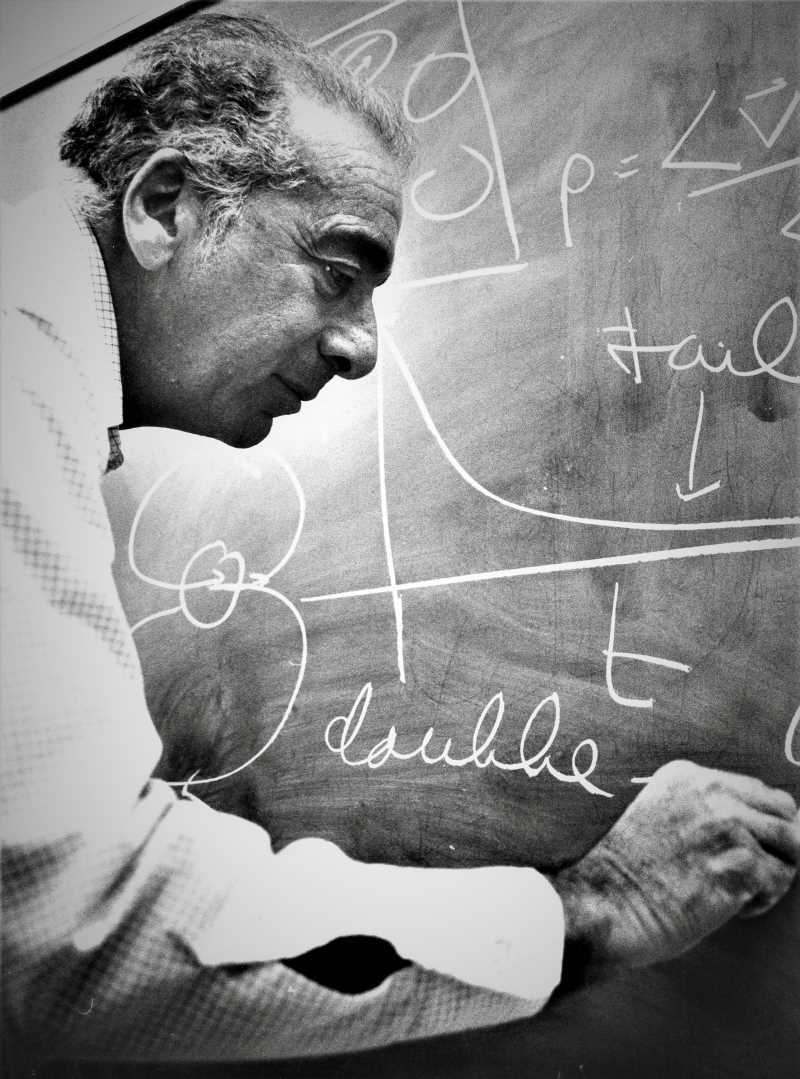 Here you will find the list of publications by Berni Alder. 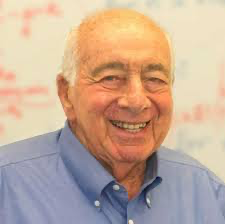 Here you will find some miscellaneous photos given to us by Berni’s friends. 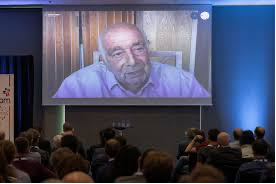 Here you will find two movies from the CECAM archives.